You are here: Home » Broyhill Innovations

Although the only sprayers available at this time are hand sprayers, Roy determines to develop a line of larger sprayers to fit jeeps, trucks, and airplanes.

The Broyhills relocate to Dakota City, Nebraska, and begin constructing the first official Broyhill building–a 40-by-80-foot structure. The building is completed and all six Broyhill employees begin working at the new site.

After the Korean War, Broyhill develops the Jeep Sprayer, which uses surplus Jeep vehicles as a spraying platform.

Hand-spraying becomes a thing of the past when Broyhill introduces the Trailer Sprayer with Boom–a 21′ apparatus enabling users to cover more acres per hour than ever before.

With the advent of the 3-point Barrel Sprayer, the task of mounting a sprayer to the rear of a tractor is made considerably easier.

Broyhill’s turf sprayer broadens the company’s market base into turf-spraying equipment for golf courses. Broyhill supplies Cushman Motors with a 103-gallon sprayer that mounts into the Cushman utility vehicle.

Broyhill creates a 12 1/2-gallon lawn and garden sprayer. A gypsy moth invasion in the New England region inspires the development of an ultra High-Pressure Sprayer.

In addition, Broyhill creates the Vehicle Refuse Box for Cushman. This unit features a special 1.6- or 2.0-cubic yard box and serves as a satellite system for larger garbage vehicles in major metropolitan areas.

Broyhill’s Recovery Sprayer for soybeans serves as a sprayer that reclaims the chemicals to be re-circulated.

The Rope Wick sprayer for soybeans wipes the chemicals on weeds that grow taller than the soybean plant canopy.

The Yamaha/TerraPro Sprayer–the first tow-behind sprayer where the pump was driven by the power take–off of an all-terrain vehicle–breaks onto the scene.

Expanding into the realm of the ultralight (an inexpensive, aerial crop-spraying unit), Broyhill released the Aero-SprA Ultralight Sprayer, which fit eight different aircraft and was shipped to 27 countries.

The 3000 Series sprayer with Groundplane Boom incorporates a unique tank design. The Groundplane follows the contour of the ground and prevents chemical waste by offering better coverage with less chemical scalping of the turf.

Years ahead of its time, the Cordless Solar Rechargeable Sprayer, designed as a backpack, captures the Sun’s rays to generate power in its compact battery and electric pump.

The 60-foot Hydraulic Fold Boom (for the agriculture market) pioneers operator safety and convenience by allowing the boom to be folded from the seat of the tractor.

Broyhill rolls out its patented FlexWing™ design for core aerators. This new design enables the units to follow the contour of uneven terrain for proper core aeration.
Broyhill’s TerraMaster and HydraMaster sprayers’ unique tank design and low center of gravity offer optimum operator visibility with PTO or hydraulic drive pumps and no tank corners for an even solution mix.

50th Anniversary of Roy and Arline. Honored at event attended by hundreds.

The new Drift Bust’r Boom features a covered broom that follows the ground contour and reduces chemical drift. The Drift Bust’r is the only self-supporting covered boom in the turf market.

Broyhill rolls out a simple but functional design for the Stadium Vac, a powered vacuum for trash removal around sports complexes and parking lots.

Roy F. Broyhill passes away October 4th from a series of strokes.

Broyhill expands its turf vehicle line with the purchase of a Wisconsin firm; the acquisition adds two three-wheel vehicles, a four-wheel vehicle, a greens brush, ball field finisher, and a turf roller/spiker to Broyhill’s product roster.

In March, the new TrailWater series of inflatable boat trailers were debuted. The trailers are “Best of Show” models with special lockable storage areas for white water or fly fishing gear. Kubota needs a special sprayer for their RTV-900. 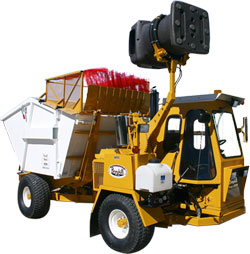 Load-and-Pack’s 30th anniversary. All units will have special decal markings in recognition. Broyhill will have its largest Load-and-Pack sales volume this fiscal year. Also, a special unit for synthetic turf decontamination was debuted. “SaniTurf” was co-designed by Broyhill, R. V. Davies and Wilfred Mac Donald Inc. to sell nationwide. Trailers for drift boats were also added to our specialized trailer offerings.

SilverWing Ag pull-behind sprayers were introduced up to 1500 gallons with 90′ galvanized shock absorption booms.  The 5 year recession started this year for most of the USA and hit small manufacturers hard.

Debris Systems lawn care trailers were starting to be planned for manufacture.  Broyhill was chosen to build these units which are 18′ to 24′ trailered units for mower & grass clipping transport for larger lawn care businesses.  June 3, 1952 we joined FEMA and 2012 was our 60th FEMA Anniversary.

Our Load and Pack refuse vehicle was redesigned during this period and now includes a taller cab, picture window on right side, 3 view camera (left, center rear, & right), new 74 hp Kubota diesel engine, air ride cab, and air ride seat for driver comfort and all glass windows in lieu of lexan plastic to enhance the non scatchable view. Our patented compactor 9.5 cu yd box is approved.Additional improvements are also under review. GForce Mist Sprayers (3pts and Skid units) were added to the sprayer line up. Manufacturing Marvels did a story at our facility and produced a video on Broyhill. Shown on FOX Business Network.

We continue to break record shipments in our Solid Waste Handling Equipment categories. We are 72 years old and service some of the largest metro areas, beaches and municipalities in the USA and several over seas.